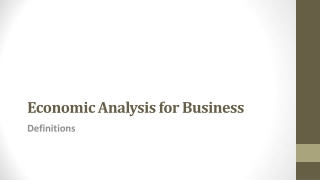 Economic Analysis for Business. Definitions. Economics - looks easy but is hard. Economics often looks easy because everyone already thinks they understand what’s going on in an economy without even having to study. Not true at all. Economic Analysis for Business - . chapter 4 governments and the market. governments. within an economy there is the