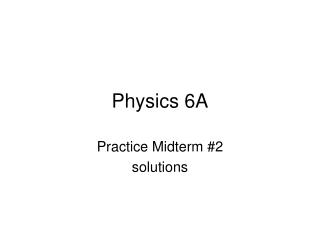 Physics 6A. Practice Midterm #2 solutions. 1. A locomotive engine of mass M is attached to 5 train cars, each of mass M. The engine produces a constant force that moves the train forward at acceleration a. If 3 of the cars are removed, what will be the acceleration of the shorter train?. USII – 6a - . technology extended progress into all areas of american life, including neglected rural areas. improved

Module 6A - . introduction traditional settings and models: essential programming for clients with cod. review 5b

Cap. 6A - . cultura. salvador dalí. was a painter born in spain. salvador dali is best known for his surrealistic

6a machining - With highly advanced machining capabilities, we design and manufacture machine parts for a diverse range

powerpoint 6a - . the prehistoric &amp; the ancient world sayre chapters 17. the visual record. chapter 17. the

Chapter 6a - . communication, integration, and homeostasis. about this chapter. cell-to-cell communication signal

Gravity - . physics 6a. prepared by vince zaccone for campus learning assistance services at ucsb. gravity any pair of