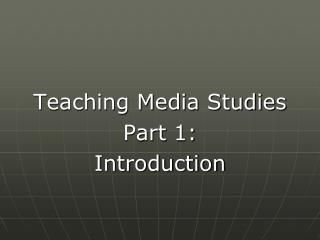 Teaching Media Studies Part 1: Introduction. Aims and Objectives. Aims To consider the ways in which meaning is presented by the media and how form, layout and presentation contribute to impact and persuasion Media Preparation &amp; Sterilization - . a medium is sterilized (living organisms removed) before usage in the lab.

An Introduction to Teaching Social Studies in the Bilingual Classroom - . prepared by global language solutions, llc for