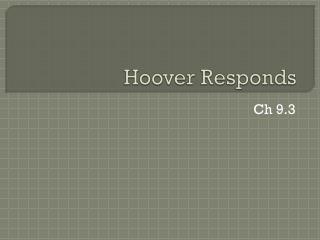 Hoover Responds. Ch 9.3. Monday, April 2, 2012. Daily goal: Understand why Hoover’s policies were unprecedented , but ineffective at relieving the Depression How the Bonus March affected his popularity. “Prosperity is just around the Corner…”. 11.3 Hoover Responds to the Depression

The USA Responds - . why, when, and how the united states joined the allies in world war 1. the somme, ypres, vimy 

Herbert Hoover - . by dalton mccormick. job. herbert hoovers job was that he was a engineer before he became president.

A body responds - . oct 10. bellringer. in a plant cell the vacuole is the storage compartment with a high concentration

Hoover Fails - . objs discuss hoover’s beliefs that shaped his response to the great depression. evaluate the impact of