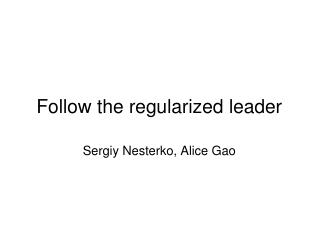 Follow the Leader - . using bluetooth communication, one robot can be made to follow the actions of a second robot.

Follow the Leader - . luke 2:1-20. 2: 1 in those days caesar augustus issued a decree that a census should be taken of

The CLLD/Leader and the Leader Cooperation - . participatory local development strategies: + leader for 2014-2020