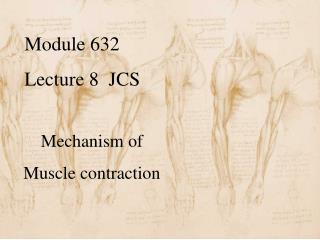 Module 632 Lecture 8 JCS. Mechanism of Muscle contraction. MODULE - 632 Lecture 8 Muscle Contraction Lecture outcomes:   At the end of this lecture a student will be aware : 1) of the major sarcomeric proteins and their molecular properties 2) of the structure of the thick filament JCS Motorcycles - We jcs motorcycles have been widely acknowledged as the most trusted triumph dealer in perth, offering

Module 8 - . workers’ compensation. learning objectives. after completion of this lesson, participants will be able to:

MODULE 8 - . job opportunities in it &amp; cs. part i. job behind the titles. module objectives. at the end of the

Module 8 - . attaching documents. objectives. in this module you will learn how to: attach documents to your grant

MODULE 8 - . control. module objectives. know what control is and how it differs from eradication recognise the

Module 8 - . reporting results. learning objectives. at the end of this session participants will: understand key points

Module 8 - . skills of leadership. task. in your groups, create the best seat using only the materials provided. your