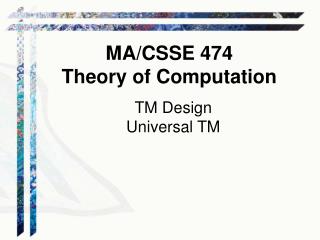 MA/CSSE 474 Theory of Computation. TM Design Universal TM. Your Questions?. I have included some slides online that we will not have time to do in class, but may be helpful to you anyway. Previous class days' material Reading Assignments. HW 12 problems Anything else. The CFL Hierarchy. MOTOTRBO TM - . linked capacity plus. communicate to a large field force across a wide area with a scalable, easy to use