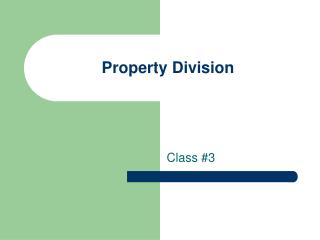 Property Division Lawyers - For a long time during a painful divorce, some things can be left aside until a later date,

Division of Property and Support - . chapter 14. family property. historically in english common law, women could not

Divorce - Property Division and Mediation - Table of contents three great ways to split the house after a divorce. four

Understanding California’s Property Division Laws - Going through a divorce is tough, and one of the most complex

Equitable division of property in divorce - Many people think that all property and debts are divided 50/50 in a divorce.

Division of Family Property and Spousal Support - . family law (civil law). grounds for divorce. in canada, there are

Factors to be considered for property division - Regarding conjugal property, ohio is an evenhanded division state. along

Fair Property Division May Promote Peaceful Divorces - However, your spouse simply doesnâ€™t want to be left without