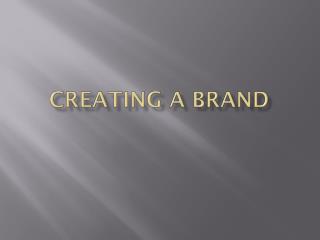 Creating a brand. One of the most powerful competitive tools that any business has is its brand – the way the consumer sees the business or thinks about its products. Three things can be part of the brand:. Brand name Logo (trademark) Slogan. Brand Name. Creating an RTC Hot Fix - . september 18, 2013. steps for creating a hot fix. find the work item where the defect is

Creating a Safety Culture - How does one create a “safety culture” in the laboratory? start by making safe science as

Creating a Paradigm Shift in Early Intervention: - . goals and progress of the canadian early intervention project.