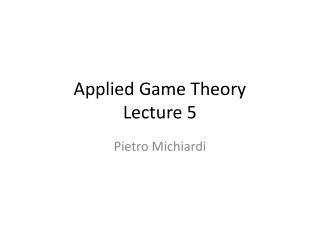 Applied Game Theory Lecture 1 - . pietro michiardi. before we even start. the grade

Game Theory Lecture Jan 18 - . in bertrand’s model of oligopoly. each firm chooses its quantity as the best response to

Lecture 5 Graph Theory - . graphs. graphs are the most useful model with computer science such as logical design, formal

Lecture 2: What is game theory?* - . formal analysis of strategic behaviour, that is, relation between inter-dependent

Applied Organizational Theory - . introduction. how to form a framework for analyzing orgs?. question we will be seeking