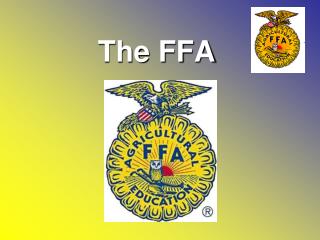 The FFA. What’s in FFA for Me?. The three parts of Agricultural Education Classroom/Laboratory The FFA Supervised Agricultural Experience (SAE). The FFA Emblem - . objectives. identify six parts of the ffa emblem. describe the meaning of each part. objectives.

What is the FFA ? - . mr. t l morris. ffa is not just a &quot;club.&quot; it is one of three integral components

The FFA Creed - . alysa sanford topic # 0004. what is a creed?. many have compared what the creed is to the ffa, to what

The National FFA Organization - . by c. kohn waterford agricultural sciences. what is the ffa?. the national ffa

Opportunities of the FFA - . make a list of as many achievements and accomplishments offered by the ffa. (may use your

FFA - . what you need to know to become a successful member!. emblem. consits of 5 symbols these symbols represent

The FFA &amp; You - . principles of agriculture. student learning objectives. 1. explain the purpose and the history

The FFA - . 1. purpose of the smith-hughes act enacted in 1917?. provided money for high school vocational agriculture

History of the FFA - . the initial idea for forming the organization resulted from congress passing the smith-hughes act

The FFA Advisor - . objectives. 1. define role model.   2.  explain the function of an ffa advisor as a