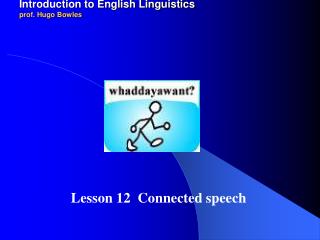 THE SEVEN STANDARDS OF TEXTUALITY - . paola catenaccio lingua inglese i (lin) 2009-2010. “a text will be defined as a

The Birth of Modern Linguistics - . ferdinand de saussure why linguistics is a science? science and ideology basil

Emanuela Cresti LABLITA- University of Florence Lisbon, May 5 2003 - For a corpus based linguistics of spoken language

AN INTRODUCTION TO THE STUDY OF THE ENGLISH LANGUAGE - . linguistics. - the scientific study of all forms of language