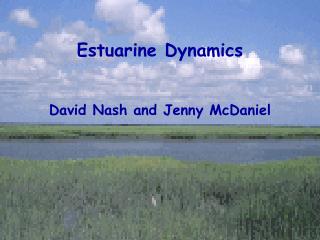 Estuarine - . what is it?. it`s a transition zone between river environments and ocean environments . it`s where salty

Nash - . meanings of places. places have different meanings, this slide will show you what they are. meanings village-a

Estuarine Cycles - . estuaries are the best cyclers in the world! . sulfur. there are many forms of sulfur in estuaries