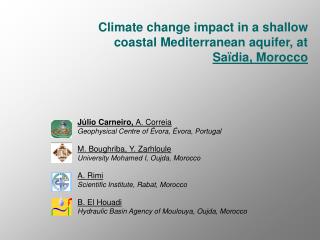 Climate Change and Kansas - . johannes feddema. department of geography the university of kansas. outline. kansas and

Adapting to Climate Change - . tacc training module 4. objectives of the module. raise awareness of the importance of

Teaching the Physics of Climate Change - . this ppt available on www.vicphysics.org - teachers - teaching the science of

Coastal vs. Plateau Native Americans - Impact of climate and tribes. with the cascade mountains as the dividing line the

The challenges of climate change - . lecture 3 – forcings and feedback. outline of course. do we understand the science

Global Climate Change - . findings from the third assessment report (tar) of the intergovernmental panel on climate