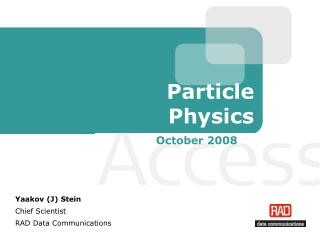 (Forward Look at) Physics at the LHC - . outline the lhc – quick introduction/reminder the detectors higgs physics –

Cosmology and Particle Physics - . what we may learn from future physics experiments andris skuja university of

Introduction to Physics - . what is physics?.  physics is the study of how things work in terms of matter and energy at

MAGNETIC PARTICLE TESTING - . introduction. this module is intended to present information on the widely used method of

Conceptual Physics Daily 10 - . adapted from physicsclassroom.com. which of these is a scientific hypothesis? a. atoms

Putting it all together - Particle Detectors - . writeup for 3 rd section: