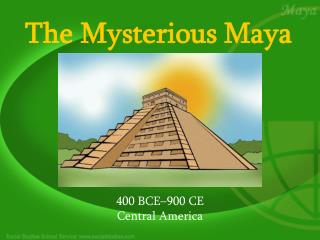 The Mysterious Maya. 400 BCE–900 CE Central America. Natural Barriers. From about 400 BCE until 900 CE, the Maya civilization stretched from the highlands of modern day Guatemala to the hot coastal plain along the Pacific Coast, to the tropical rain forest of the Yucatan Peninsula.

The Mysterious Nucleus - … why some nuclei are stable and others are not. the mysterious nucleus. four forces….

The Mysterious Tadpole - . building background. do you recieve gifts?. why do you receive gifts? what are they? . who

THE MYSTERIOUS MOSQUTIO - Malaria. the mysterious mosqutio. introduction. hi my name is maddi and this is sophie, we are

The Mysterious Murder! - . by: katelyn lipscomb . the crime. early in the morning of september 13 th , a man broke into a

The Maya - . the maya civilization. 250-900 (classic period) most developed in mesoamerica written language dozens of

The Maya - . the maya. the mayans were the first native americans to develop a written language. why the maya?. the maya

The Maya - . the big idea the maya developed an advanced civilization that thrived in mesoamerica from about 250 until

The Maya - . chapter 23. overview of the mayan civilization. an advanced civilization that included more than 40 cities

THE MYSTERIOUS MOSQUTIO - Malaria. the mysterious mosqutio. introduction. hi my name is maddi and this is sophie, we are

The Mysterious Visitor - . the mysterious visitor. one night, as diana was doing her homework…. behold the immortal

The Mysterious Tadpole - . al- bashair private school grade three. 1- the driver uses the wheel to stay in control of the