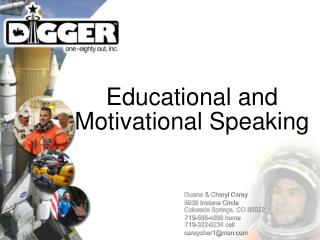 U.S. Motivational Speaking Industry - Simply the most comprehensive business analysis that exists of the $1.9 billion

Get Motivational Speaking in Kenya from Destiny Life Coaching - If you think you lack impressive skills and qualities,

Motivational Q and A - . today’s writing task has motivational theme. choose 3 of the following prompts and develop a

Motivational and Positive Language - . encouraging and persuading pupils with behavioural difficulties to stay on

Evolutionary and Motivational Factors - . why do people help?. evolutionary factors in helping: the “selfish gene”.

Speaking and writing - . unit 2 body language. learning aims. 1.understand how to give, accept and refuse

Listening and Speaking - . unit six. listening 1:“we have an opening now”. task 1: listen for details. how to inquire

Speaking and pronunciation - . chapter12 part 1 providedby:fpourshahbaz. what are speaking and

Speaking and writing - . 正安县第二中学 袁先忠. dictation. in ancient olympics, women were not allowed to