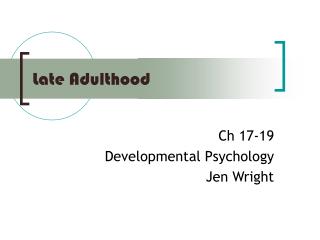 Adulthood's Commitments - . “a healthy adult is one who can love and work.” – sigmund freud. how was your day so

Understanding adulthood! - . adulthood: the lifespan stage from age 18 onwards, and a time of continuing physical,

Middle And Late Adulthood - . spans the years from 40-65 physical stamina declines gradually the greatest challenge is