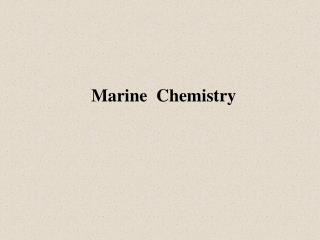 Marine Chemistry and Sediments Test Review - . oceanography. what is the forchhammer’s principle? . the saturation

Welcome to Chemistry/Marine Biology / Environmental Science - . need help? teacher is only available from 7:00 am to 7:30

Marine - Remarkable natural adventures that plunge visitors and life time apprentice in the memorable. we have