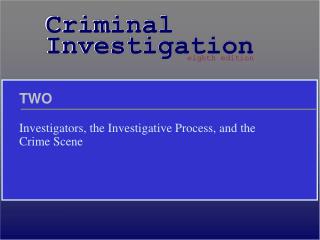 TWO. Investigators, the Investigative Process, and the Crime Scene. WHAT IS A CRIME?. A crime is the commission or omission of any act, which is prohibited or required by the penal code of an organized political state, to which some punishment or sanction is attached. Classifications Felony

Two Plus Two Equals Four - . 1 corinthians 12:13 for by one spirit we were all baptized into one body, whether jews or