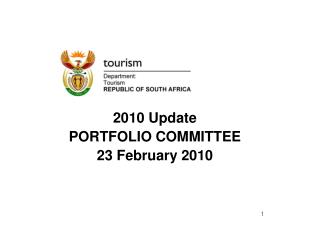 2010 Update PORTFOLIO COMMITTEE 23 February 2010 Purpose To provide the Tourism Portfolio Committee with progress on the tourism preparations for 2010 World Cup™ as per the 2010 Tourism Plan. Layout of the presentation Accommodation Overview Information per province: Team based camps

FEBRUARY 23, 2010 - . your name goes here. stats and facts – the big picture (based on research data from the american

Creativity PLC February 23, 2010 - . at the last meeting we discussed ideas for incorporating technology into our

February 23, 2010 Conventions Day 5 - . how has the author used capitalization in an unusual way? what is the effect of

National MANCOM Meeting February 23, 2010 - Besra progress report ( based on the final draft of the besra implementation