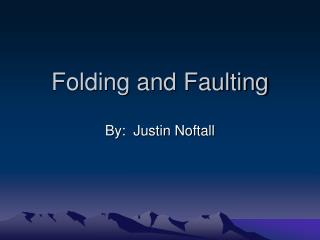 Folding and Faulting. By: Justin Noftall. Folds. A fold is when the earth’s crust is pushed up from its sides. There are six types of folds that may occur: Anticline Syncline Tight Fold Overfold Recumbent Fold Nappe Fold. Anticline.

Folding and Faulting - . folds. a fold is when the earth’s crust is pushed up from its sides. there are six types of

Folding and Faulting - . chapter 6. folding. the buckling of a rock layer that was once horizontal. buckles or folds

Faulting and Folding - . by maria, chris, kayla, and taylor. fault. -faults are fractures in the crust along which

Folding and Faulting - . what is a fold?. a fold is a bent rock layer or series of layers that were originally horizontal

Stress, Faulting, Folding, Mountain Building - . inside earth:. have you ever tried to bend something, only to have it

Ground Deformation: Faulting and Folding Earthquakes and Mountain- Building - . this is referred to as stress.

FAULTING - . definition. fractures in which noticeable movement has occurred. cause of faults?. stress – forces at work

Faulting - . location, description and formation of rift valleys and block mountains. what is a fault / faulting?. a

Faulting And Earthquakes - . forces inside earth. objectives: explain how earthquakes result from the buildup of three