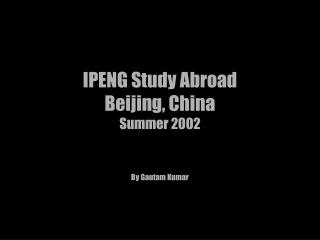 Belize Study Abroad – Summer, 2013 - From mountain to sea: ecological and cultural diversity in a jewel of central

Study Abroad In China 2007 - . an unforgettable experiences for a group of gcsu students in china. a photo presentation

Beijing, China - My week in. beijing, china. where in the world…. finding beijing. the peoples republic of china

Study Abroad Curriculum Integration Summer Project - . be at the. wednesday, may 21 st 2014. @. let the world be your

China Beijing City - What i saw there. after the 80 countries i visited, my favorite holiday places are