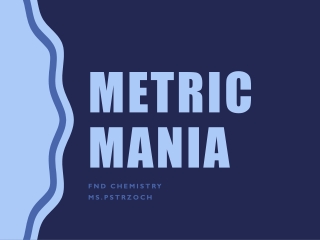 Metric Mania. FND CHEMISTRY MS.PSTRZOCH. Once Upon a Time …. in a faraway land named Metric Kingdom, there lived a king who loved chocolate milk. His name was King Henry.

Metric Mania - . the metric system, science, and you!. why metric?. in science class, we will be using the metric

Metric Mania and Density - . answer the following questions! you may use your notes from yesterday. how many significant

Mania - . by stanton brown . overview of mania . mania means an unusual amount of happiness in a mental state. feeling a

Foosball Mania - . if you are buying, then we are supplying !. welcome !!!. we have it all !. helmets shoulder pads

HOQUEI MANIA - . association tournament of roller hockey. information:. the tournament is going to start at 1st of

Tulip Mania - . how a flower grew into an economic monster!. holland. a region and former province located on the western