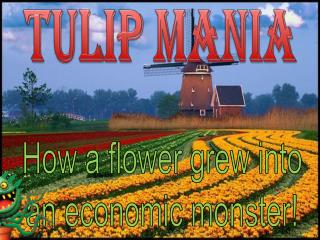 Tulip Mania. How a flower grew into an economic monster!. Holland. A region and former province located on the western coast of the Netherlands The term Holland is also frequently used to refer to the whole of the country of the Netherlands. . Key Terms. Tulip Mania - . what is tulip mania?. tulip mania. how a flower grew into an economic monster!. holland. a region and

Tulip Mania: Holland - . in 1623, a single bulb of a famous tulip variety could cost as much as a thousand dutch florins

The Dutch Tulip Mania - . documentary on tulip mania. dennis chiu period 3. overview of the low countries during the 17

Mania - . by stanton brown . overview of mania . mania means an unusual amount of happiness in a mental state. feeling a