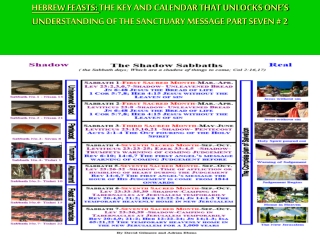 THE SEVEN FEASTS OF ISRAEL AND THE HEBREW CALENDAR - . crucified on passover nisan 14, 32 a.d. buried on unleavened bread

Biblical Feasts - . introduction. according to common usage, a “feast” refers to a large meal, especially a

The Feasts of Israel - . the lord’s appointed times ( leviticus 23). terms in leviticus 23. מוֺעֵדִים (

FALL FEASTS - . the feasts of yahweh. and yahweh spoke to moses, saying, &quot;speak to the children of israel, and

The Feasts of the Lord - . god commanded his people the jews to keep the sabbath, the sabbatical and jubilee times of

The Feasts of The Lord - . the three fall feasts 5. feast of trumpets 6. day of atonement 7. feast of tabernacles . the

The Hebrew Year - . samech tet 5769. s samech f tet. what will the year look like?. ready or prepared? ready or not here

The Hebrew Bible - . a collection of some of the most important books in western civilization. the hebrew bible.

The Hebrew Scriptures - . a

The Hebrew Alphabet - . from aleph to tau. basics of biblical hebrew by gary patico &amp; miles van pelt. in class

The Hebrew Bible - . an introduction to the canon. some basic terminology. ce (the common era) use in the place of ad