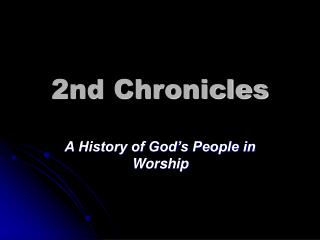 2nd Chronicles. A History of God’s People in Worship. Purpose of the Books of Chronicles. To set forth a record of the priestly worship of God’s people from David to the exile To give the fulfillment of the promises of the Mosaic Law regarding faithfulness and unfaithfulness to the covenant

Chronicles - The work of the "chronicler" (chr). a. postexilic historical compositiontraditionally connected to

Martian Chronicles - . by ray bradbury. january 1999 rocket summer . sets scene for the rest of the novel introduces the

SSF Chronicles - . the story and more. the beginning . it starts off with this town called spiriton. in this town is the

1 CHRONICLES - . 1 chronicles. 1 and 2 chronicles originally one book until 180 bc . lxx called it &quot;the things

2 Chronicles - . the book(s) of chronicles focuses on:. the tribe of judah. the line of david. the temple in jerusalem.

Chronicles of Comenius - . we prepared a special book with all the most important events of our project. you can find

The Martian Chronicles - . by ray bradbury pp. 73-103. “the settlers”. the men of earth come to mars. they suffered