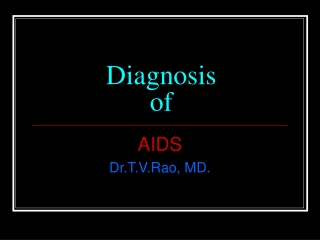 Diagnosis of. AIDS Dr.T.V.Rao, MD. AIDS A Global Concern. TODAY THERE IS NO REGION OF THE WORLD UNTOUCHED BY PANDEMIC OF AIDS. Majority of persons infected with HIV present with AIDS soon or later.

Diagnosis of TB - . learning objectives. list the 4 principle components of a tb evaluation describe the criteria which

Diagnosis of HIV - Objectives. describe why establishing trust between the caregiver and the patient is essentialidentify

DIAGNOSIS OF PREGNANCY - . signs and symptoms of pregnancy. presumptive signs lead a woman to believe that she is

Diagnosis of Pneumonia - . investigations of community acquired pneumonia. the objectives are to:. radiological

Diagnosis of gout - . background. gout is a severe inflammatory disease caused by the deposition of monosodium urate

Diagnosis Of Depression - Depression is a vast term. it can be understood by many explanations. most commonly it is