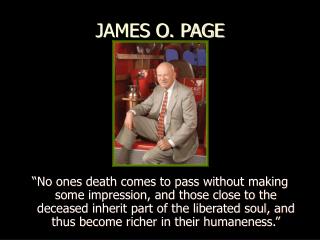 JAMES O. PAGE. “No ones death comes to pass without making some impression, and those close to the deceased inherit part of the liberated soul, and thus become richer in their humaneness.” . An Introduction to EMS Research. Bryan Bledsoe, DO, FACEP Midlothian, Texas. Definitions.

JAMES - . don’t give up !. james verses 2 to 4. consider it pure joy, my brothers and sisters whenever you face trials

James - . waiting for photo. life before - a little bit in the middle - life after. before. james lived in residential

James - . half brother of jesus leader of the church in jerusalem his epistle, distributed among the jewish/christian

JAMES - . marks. of. maturity. j ames: marks of maturity. james 1:2-4. group question: one person share about someone who

The Benefits of Music Education on Higher-Level Thinking Skills and Math - . by james lykins. purpose statement. the