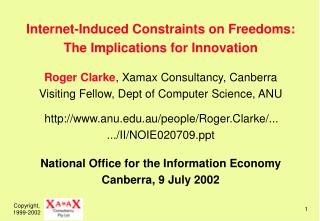 Internet-Induced Constraints on Freedoms: The Implications for Innovation Agenda Internet-Induced Constraints on Freedoms: The Implications for Innovation Agenda

Capital Cities - . do we know the answers to these popular 50 countries capitals?. 1. afghanistan. a) tirana b) kabul c)

A Good UX How To Make It Happen - Client. tools. consultancy. the slides contain brief notes some slides are animated and

Thinking about Burdens and Harms - . third annual act alcohol and other drugs sector conference all things being equal: