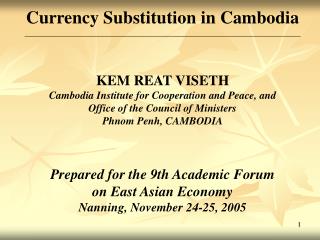 G reat Britain - Great britain is the name of the island which is made up of england , scotland ,wales and northern

POVERTY IN CAMBODIA - 26% of the cambodian population live below the poverty line. the average daily income is less than

Contracting in Cambodia - . maryam bigdeli who cambodia. cambodia at a glance. population – 14 million (2008) –

INVESTMENT IN CAMBODIA - . arranged by mrs. tui pakarat -rutten managing director of intra group of company and the

Education in Cambodia - . chisono kitahara. why i chose this topic?. basic information. official name : kingdom of

KEM REGION sights - . lepostrov island, the historic center of kem. on this small island in the middle of the kem river