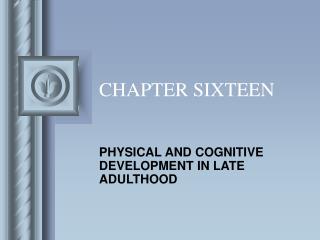 CHAPTER SIXTEEN. PHYSICAL AND COGNITIVE DEVELOPMENT IN LATE ADULTHOOD. I. VARIABILITY IN LATE ADULTHOOD. The scientific study of aging is known as gerontology Late adulthood is now thought of as a period of tremendous individual variability rather than one of universal decline. Chapter Sixteen - . mice. alat presentations study tips. if viewing this in powerpoint, use the icon to run the show