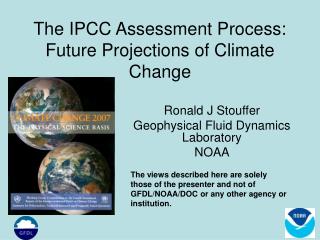 The IPCC Assessment Process: Future Projections of Climate Change . Ronald J Stouffer Geophysical Fluid Dynamics Laboratory NOAA. The views described here are solely those of the presenter and not of GFDL/NOAA/DOC or any other agency or institution. What is the IPCC? http://www.ipcc.ch. Physical Science Basis of Climate Change : IPCC 2007 - . chapter 7: couplings between changes in the climate system and

Chapter 20 - . climate change and ozone depletion. chapter overview questions. how have the earth ’ s temperature and