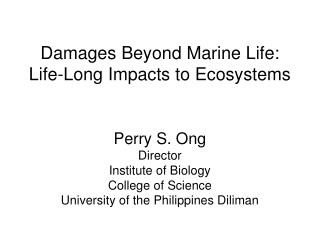 Introduction to Marine Ecosystems - . ocean ecosystem. an ecosystem is a level of organization that includes living

Life in the Ocean - . marine biology. the tremendous variety of marine organisms that inhabit the diverse oceanic

Life in Sweatshops - By: emily gerwin &amp; jennifer thomas sweatshops: by definition a sweatshop is a workplace

Paleozoic Life - . life forms in the paleozoic. the paleozoic begins with the appearance of fossils of marine animals.

Freshwater Ecosystems - . the types of organisms in an aquatic ecosystem are mainly determined by the water’s salinity

Interactions within Ecosystems - . ecosystem- is a community and its physical and chemical environment. examples of