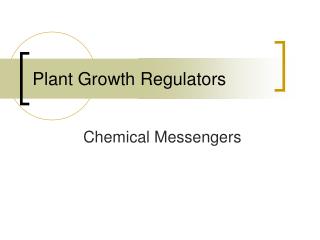 Plant Growth Regulators. Chemical Messengers. Hormones. In plants, many behavioral patterns and functions are controlled by hormones. These are “chemical messengers” influencing many patterns of plant development.

Growth and Maturation - . what measures would you use to describe growth?. how are body parts different between adults

Endocrinology Board Review - . september 24, 2010. growth. growth. after 18mos of age, growth curve should be followed

PLANT GROWTH REGULATORS - . the following powerpoint presentation is based, in part, on material accessed on the internet