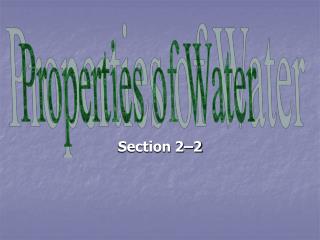 Properties of Water . Section 2–2. Objective. This section describes the makeup of water molecules. It also explains what acidic solutions and basic solutions are. The Water Molecule . Is the following sentence true or false? A water molecule is neutral. TRUE.

MSHDA HUD Section 3 Training - . to increase the capacity of nonprofit organizations and local units of government to