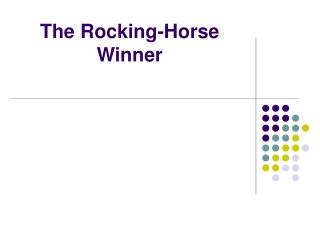 ROCKING HORSE WINNER - . found poem. found poem. there once was a woman who married for love yet she had no luck she felt

Rocking the ISAT - . rocking the isat: relaxation strategies. deep breath take a deep breath. hold it for about 3

Winner - . test 1 review (10 questions). health and physical education. how strong are you? click start to find out!.

THE RED HORSE - “i must work the works of him that sent me, while it is day: the night cometh, when no man can

Winner for the competition - . by sour sweet lover. the winning