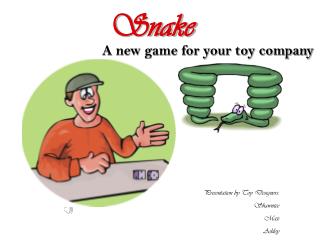 Snake. A new game for your toy company. Presentation by Toy Designers: Shawntee Max Ashley. Snake. As game designers, we believe that the new game for your company should: Be equally likely, giving each player an equal chance of winning Be a game of chance Indigo snake - . by: andrew nickerson. there habitat . they are found in a variety of habitats. but their habitat is

Snake Bites - . introduction. there are over 3,000 species of snakes on the planet, but only 15% are considered to be

Snake Jokes - . t. trimpe 2008 http://sciencespot.net/. can you unscramble the words to figure out the punch line? hint:

Garter Snake - . by jaimin and mitchell . how it moves. the garter snake slithers by shifting its body left and right

Kirtland snake - . by c ody and sean. what do they look like?. it has a dorsal background that is reddish brown a nd is

Snake Bite - . presented by : a bdulaziz a lshaikh supervised by: dr.adel altamimi. snake bite is a well-known