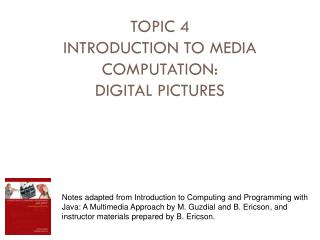 Topic 4 Introduction to Media Computation: Digital Pictures. Notes adapted from Introduction to Computing and Programming with Java: A Multimedia Approach by M. Guzdial and B. Ericson, and instructor materials prepared by B. Ericson. Computing with media.

Topic 1 The History of Oceanography - . geol 2503 introduction to oceanography. early evidence of humans and the sea. by