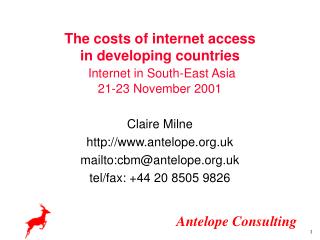 Measuring the Internet in South East Asia - . michael.minges@itu.int. “ when you measure what you are speaking about

Internet &amp; Developing Countries - . focus group promotion and use of the internet infrastructure in developing

Developing World Access to the Internet - . background of the information. rapid expansion of the internet holds

Imperialism In South East Asia - . burma. burma, 1880. burma, on the eastern border of india, was naturally of importance

SCALLA 2001 Bangalore 21-23 November - . overview of conference. vision. for effective use on it, people need it to use

Internet Access without the Internet - . cooper christian chris smart. purpose . create an environment that presents the

THE ENERGY ACCESS SITUATION IN DEVELOPING COUNTRIES - . a review focusing on the least developed countries and

Determinants of Diffusion of the Internet in Developing Countries: A Case of Nepal - ?nepal is one of many historically