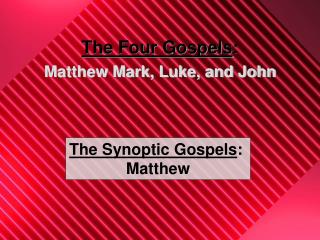 Matthew, Mark, Luke, and John- a table to compare the gospels - . by: maddy lukas, laura ruperez, and caroline ahearne .

t he Four Gospels - Intro to. t he four gospels. life of christ ~fall 2010. the four evangelists 8 th century the book of

The passion of the Lord Jesus From the Gospels of Matthew, Mark, Luke and John - . … lo golpeaban …. … again and

Chapter 12 The Four Gospels by Chaplain Ron McCants - . the literary worlds of the gospels. mark: the secret revealed

Matthew, Mark, Luke, John - . old or new testament? arguments answered. since jesus lived under ot law. everything he did

The Four Gospels - Life of christ. the four gospels. © john stevenson, 2011. matthew. the gospel of the king. the gospel

The Gospels of Matthew and Luke - . tuesday, january 23, 2007. review. learned that nt gospel writers were interpreters