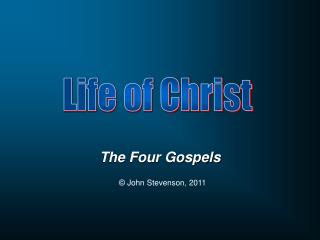 Life of Christ. The Four Gospels. © John Stevenson, 2011. Matthew. The Gospel of the King. The Gospel According to Matthew. The Author: Matthew / Levi Writes to the Jews A Jewish Genealogy through David to Abraham A focus on the Kingdom of Heaven Describes the bribery of the guards MARY IN THE GOSPELS - . the reader of the gospels is at first surprised to find so little about mary; but this obscurity

Islam: History, values and culture - . we are all muslims; some have the gospels, others have the quran. a patriarch from

Jesus the Christ - . a survey of the bible the gospels – matthew, mark, luke, and john http://kohlin.com/biblesurvey/.

What is Gnosticism? What are the Gnostic Gospels? - . in the da vinci code

The Synoptic Problem - . source criticism. the synoptic problem. how do we account for the similarities as well as the

Protestant Reformation - . background on christianity. rooted in jewish tradition/torah and the person of jesus of

Faith Fact or Fiction - . in the da vinci code…. “one particularly troubling theme kept recurring in the [gnostic]

LATIN - Am + dg. latin. appreciation workshop. latin through the gospels according to st. mark. session 6. am + dg.

The Synoptic and the Johannine Gospels - . purpose of the