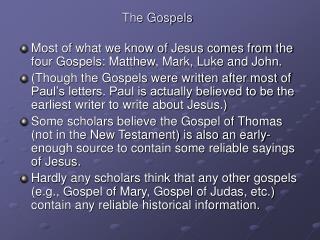 The Gospels. Most of what we know of Jesus comes from the four Gospels: Matthew, Mark, Luke and John. (Though the Gospels were written after most of Paul’s letters. Paul is actually believed to be the earliest writer to write about Jesus.)