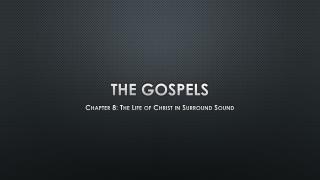 The Gospels. Chapter 8: The Life of Christ in Surround Sound. Memory Verse.