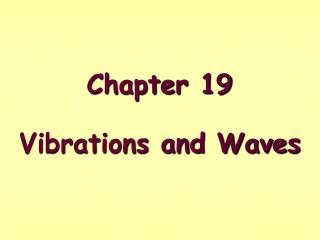 Chapter 19. Vibrations and Waves . There are two ways to transmit information and energy in our universe:. Particle Motion and Wave Motion . Vibration -. Wiggle in time. Light and Sound Both are vibrations of different kinds. Wave -. Wiggle in space . 1. VIBRATION OF A PENDULUM.