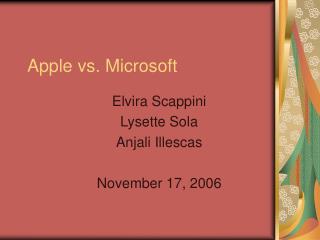 Google vs. Apple - . android vs. iphone. the mobile marketplace is growing quicker than ever. iphones account for 53% of

APPLE VS. SONY - . by jenny lin. apple &amp; sony-how did it start?. an introduction to apple and sony. when did it

Apple Vs. Samsung - Tablets. …you get the picture. apple vs. samsung. samsung “slavishly” copies the ipad design in

PC Vs Apple - . harman and alvin power point. pc is a better video game computer. while macs can only run 2d 6 pixels

PC Vs Apple - . harman and alvin powerpoint. http://www.youtube.com/watch?v=42fawmwcj-a. mac vs pc. the mac is very

Microsoft Access vs. Microsoft Powerpivot - . kate lynch. what do these have in common. why do people even need access or

Microsoft Surface Go 2 vs Apple iPad: Which One is Better - If your requirement is of an ideal device which can perform