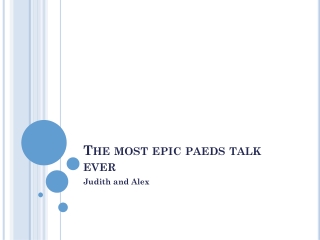 The most epic paeds talk ever. Judith and Alex. We will cover. Genetics Neurology Development Disability And hope to make it as interactive and fun as possible . List as many features as you can of this condition. Down Syndrome. Trisomy 21 Risk increased in older women

Paeds – PBL - . group 4. trigger . trigger 1: a 7 year old girl is seeking your help because of toothache on her lower

Epic Elmo: A Most Unusual Epic Hero - . elmo is the hero of the famous epic poem, “elmo in grouchland ”. elmo in

The most amazing PowerPoint ever! - . a lesson in the three types of irony. verbal irony. spoken words only. when what

The Most Funded Kickstarter Campaigns Ever - Since it was established in 2009, kickstarter has gone about as a

The Most Epic Mindset Project Ever to be Shown t o H uman L ife ! - . the digital generation wars. by: dylan and alyssa.

What is the Most Comfortable Pillow Ever? - Old pillows are the single most common problem of back pain and many adults

The 9 Most Important Electrical Inventions Ever

The Most Important Grade You’ll Ever Earn - . rules of the game 1. choose one person to hold up the correct true or

What’s the most penetrating question ever asked? - . “what am i to do with jesus?”. matthew 27:22 pontius pilate.

Country Club Vacation: The Most Relaxing Ever! - Country club vacation provides its members with great services like

The Most Epic Budget-Friendly Attractions in Sydney - For further convenience, donu2019t hesitate to take full support of