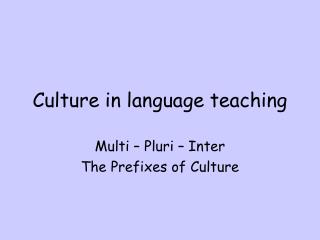 Culture and Language Teaching - . nicholas bradley nbradley@vega.aichi-u.ac.jp. 1. what is culture? 2. the ambiguity of

Culture &amp; Language Teaching - One of the oddest things in the world must be a language teacher who only speaks

Teaching Culture - . what do you think?. culture is a difficult term to define, because it includes so much. in your own

Listening in Language Teaching - . tefl course on chapter 16. forewords. for many years listening skill did not receive

Teaching Culture in EFL Classrooms - . naima leghtas. 1- what is culture ?. 2- why is it important to teach culture ? in

Teaching in a Participatory Culture - . how wikis can support learning. the world is flat. thomas l. friedman describes

class 10 teaching in culture - . c&amp;i 320 spring 2002. schools should be about educating hearts and minds

ON TEACHING CULTURE - . culture is like an iceberg… most of the what truly matters is hidden underneath…. language