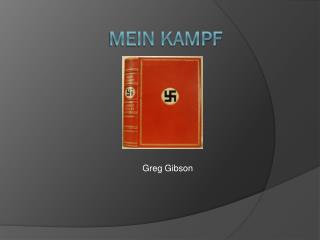 Greg Gibson. Mein Kampf. What is it?. Mein Kampf (translates into “My Struggle” or “My Fight”)

Mein Kampf - . hitler's arrest . adolf hitler was sentenced to five years in prison when found guilty of taking part in

Mein Kampf - . 3164892 can you remember this number?. a page in &quot;mein kampf&quot; where hitler discusses the

Mein Kampf “My Struggle” - . homburg american studies. volume 1 of  mein kampf  was published in 1925 and volume 2

Published in his book Mein Kampf – which was a bestseller in Germany and sold millions - “..the personification of