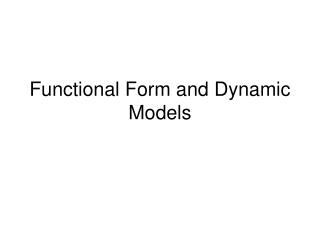 Functional Form and Dynamic Models. Introduction. Discuss the importance of functional form Examine the Ramsey Reset Test for Functional Form Describe the use of lags in econometric models Evaluate the Koyk transformation as a means of overcoming some of the problems of lagged variables.

FUNctional Form - . adding forms of nonlinearity to regression models. getting to know your data. you need to have a

Dynamic Models - . introduction. assess the partial adjustment model as an example of a dynamic model examine the ardl

Functional linear models - . three types of linear model to consider:. response is a function; covariates are

SNMP Communication and Functional Models - 2. overview. ? we have covered the organization and information models of

Sinusoidal Functional Form and Its SHM Perspective - . only to wait and watch the 5 frames (transit) to the end for